How It WorksOur technologyFAQresourcesGet notified

How It WorksOur TechnologyFAQResources
Thank you! Your submission has been received!
Oops! Something went wrong while submitting the form. 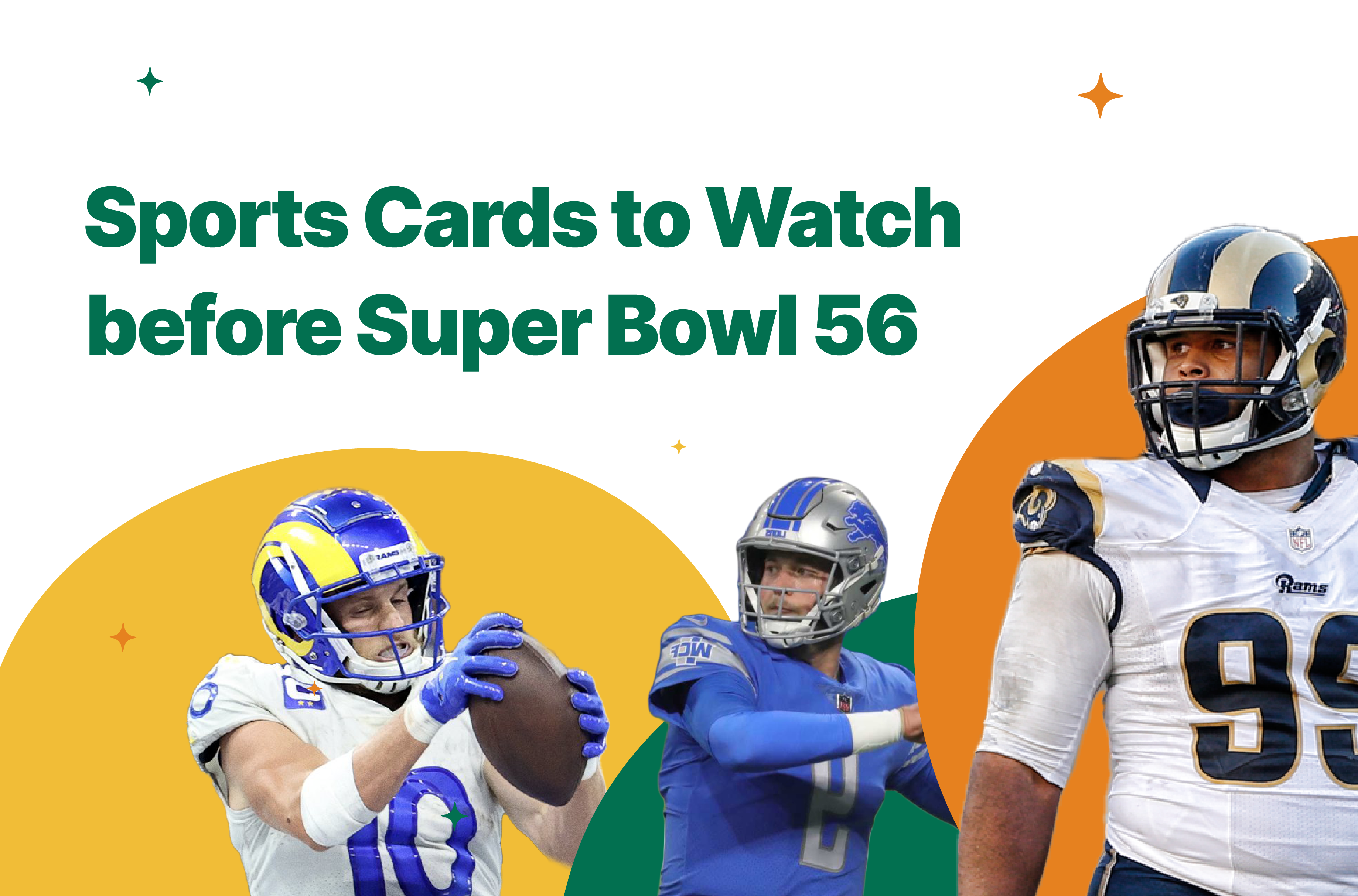 The rich text element allows you to create and format headings, paragraphs, blockquotes, images, and video all in one place instead of having to add and format them individually. Just double-click and easily create content.

The rich text element allows you to create and format headings, paragraphs, blockquotes, images, and video all in one place instead of having to add and format them individually. Just double-click and easily create content.

Super Bowl 56 is scheduled for this Sunday February 13, 2022, between the Cincinnati Bengals versus the Los Angeles Rams. The Rams will be playing the game in their home stadium and are favored to win the game. Sports cards from both teams have reached some of the highest values all-time because of appearing in the Super Bowl.

Super Bowl 56 is scheduled for this Sunday February 13, 2022, between the Cincinnati Bengals versus the Los Angeles Rams. The Rams will be playing the game in their home stadium and are favored to win the game. Sports cards from both teams have reached some of the highest values all-time because of appearing in the Super Bowl.

Super Bowl 56 is scheduled for this Sunday February 13, 2022, between the Cincinnati Bengals versus the Los Angeles Rams. The Rams will be playing the game in their home stadium and are favored to win the game. Sports cards from both teams have reached some of the highest values all-time because of appearing in the Super Bowl. In this post we will try to  examine what  some of the sports cards we think are worth watching heading into to the start of the big game.

Aaron Donald is regarded as one of the best defensive players in the entire NFL. He is already a three time Defensive Player of The Year award winner. Many football experts already consider him a lock future Hall of Famer. He is trying to win his first Super Bowl, which will only add to a fantastic career resume. Donald’s Chrome PSA 10 rookie could have been bought for around $100-115 only two months ago and now these are valued at $225-275. This card should reach $300+ if the Rams do win the Super Bowl.

Cooper Kupp had a historic season with the Rams and one of the best seasons at the wide receiver position ever. Kupp’s sports cards have exploded in value this season reaching an all-time high. Many football experts are predicting Kupp to have a big game during the Super Bowl and this card is regarded as one of his more affordable rookie cards left. This card can be bought for $50-60 range and is a great card to buy and have graded by PSA 10. A PSA 10 example is selling as high as $500. A few months ago, this card was valued at the $10-20 range ungraded and has since nearly tripled in value. This is a great alternative rookie card to buy of Kupp and is the next best option after his Prizm.

Matthew Stafford was traded to the Los Angeles Rams at the beginning of last year after playing with the Detroit Lions for 12 years. Stafford’s cards saw an all-time high in value last year when the trade was first announced. During this past regular season, his cards came back down in value. Winning a few playoff games and appearing in the Super Bowl as a quarterback will give you a nice bump in value. Only about a month ago, this card was selling for around $150 and now it is approaching nearly $400 just a few days before the Super Bowl. This is a limited card graded in a PSA 9 and PSA 10 example. Stafford is already on a Hall of Fame path and a Super Bowl win will most likely get him in the Hall of Fame. He is favored to win Super Bowl MVP and just turned 34 years old.

Jalen Ramsey is regarded as the best cornerback in the NFL. The Rams traded for Ramsey a few years ago and now he is getting a ton of hype heading into the Super Bowl. Ramsey will have to cover superstar rookie wide receiver Ja’Marr Chase the majority of the game. Many football experts are already considering Ramsey a future Hall of Famer. A Super Bowl win will greatly increase his odds of getting in the Hall of Fame someday. Ramsey’s most popular card is his 2016 Prizm rookie; a graded PSA 10 example is very limited with only 59 examples in existence. This card has doubled in value since the start of the playoffs and is selling for $150 and trending up.

Cam Akers worked his way back from an Achilles injury this past summer. Akers was a rookie last season with the Rams and became their starting running back. At the beginning of the playoffs, Akers came back from injury and made a big impact with the Rams. One of his most popular rookie cards is his 2020 Panini Prizm graded a PSA 10 example. This card is selling for around $50 and has some upside to increase more if the Rams do win the Super Bowl.

Joe Burrow in just his second season has now reached the Super Bowl. Burrow cards have exploded in value within the last couple of weeks. Nearly all of his cards have seemingly doubled or tripled in value recently. One example is his 2020 Panini Contenders Auto rookie. This card was valued around $900-1,000 a few months ago and now they are $3,500-4,000 just a few days before the Super Bowl. A card like this saw one of the biggest increases in value in the hobby the last couple of months. Contender’s rookie autographs are amongst some of the most popular in the football sports card market. Burrow could win the Super Bowl and then he will easily be regarded as a top five quarterback in the NFL.

Ja’Marr Chase dominated as a rookie wide receiver this past season with the Bengals. Chase had 81 catches, 1,455 receiving yards and 13 touchdowns. One of Chase’s most popular cards this season is his Downtown Silver rookie card. This card is very rare and limited and considered a case hit. These were selling for $400-800 a few months ago and now they are selling as high as $1,100-1500 ungraded. A number of new football boxes or sets have not yet been released yet like Prizm or Contenders, which is why this card is widely considered one of Chase’s best cards on the market.

Joe Mixon was third in rushing yards overall, this past season 1,205 and had 13 touchdowns. Mixon is still only 25 years old; his most popular rookie card is his 2017 Prizm PSA 10 rookie card. In 2017, all of Prizm rookies are considered refractor rookie cards; the same was the case in 2016. The past few years Prizm has featured both a base and separate refractor version now. Mixon’s Prizm card is valued around $60-80. This card has remained at that value all season, only a few have trended at the value $150. There is still a number of Mixon PSA 10 Prizm rookie cards that can be bought for $60-80 before the Super Bowl.

Tee Higgins is the Bengals number two option at the wide receiver position. Higgins eclipsed the 1,000-yard mark with six touchdowns this past season in his second season. Not many of these have received a PSA 10 example and only 182 exist. The last completed eBay auction of this sale went around $50. Higgins card has remained at that value all season, heading into the Super Bowl this card can quickly double in value if Higgins has a good game and the Bengals win.

Trey Hendrickson is the Bengals best defensive player on their team. Hendrickson had 13.5 and 14 sacks the past two seasons. This past season was his first season with the Bengals and he has made an impact so far in the playoffs. Hendrickson only has two notable rookie cards and this one is regarded as is most popular. This card has number of serial numbered variations and the one pictured is the base version. This is a nice card and only sells for $10 and Hendrickson is a Super Bowl sleeper that could have a big game. A number of Hendrickson serial numbered rookies have sold within the last couple of weeks as well.

Find the sports cards you love